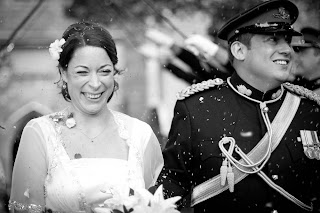 Rosemonde & Oliver were married at St. Mary’s Church St. Briavels and had their reception in the grounds of the stunning St Briavels Castle over the road.
I was one of two wedding photographers and I spent some time with the groom and his best man as they prepared for the big day, they were both very chilled and relaxed as the best man sat on the bed writing his speech for that evening….
Their service was lovely as to be expected but things livened up a little once we left the church.
Rose & Ollie left the church to be greeted by the guard of honour in full ceremonial dress and swords aloft, the new couple walked through the military arch and were met with a hail of confetti, a great opportunity to get some interesting photographs.
As we entered the courtyard we were greeted by the subtle smell of a hog roast simmering away, this smell would tease me for the next few hours as we focused on capturing some good reportage photography of the guests and their interaction with the new couple.
Later there was a less formal blessing in the gardens before the guest sat down to eat and get ready for the days speeches.

St Briavels Castle is a moated Norman castle at St Briavels in the English county of Gloucestershire.

The castle is noted for its huge Edwardian gatehouse that guards the entrance.

St Briavels Castle was originally built between 1075 and 1129 as a royal administrative centre for the Forest of Dean.

Built in the early 12th century, St Briavel’s was an important royal castle on the frontier with Wales and the administrative and judicial centre of the Forest of Dean – a royal hunting ground where the game was protected and the king alone allowed to hunt.

Edward, I added a fine twin-towered gatehouse to St Briavel’s in 1292. During his reign the castle was a crossbow bolt factory, using local Forest of Dean iron to produce weapons for his campaigns against the Welsh and Scots.

After the conquest of Wales, the gatehouse became a debtor’s prison, and the castle is now a youth hostel, set in the wonderful walking country.

If you click below it will take you directly to google to see the full reviews.

Photography by Bryan
5.0
Based on 21 reviews

Karim Amer
19:59 06 May 20
Cannot recommend Bryan highly enough. He very kindly shot our wedding in the Cotswolds and did a wonderful job... capturing the emotion of the day. Bryan was seamlessly always in the right place, at the right time, to capture the moment beautifully. Bryan is also professional and, simply, a very nice person.read more

Ray Mond
22:46 17 Apr 20
So easy to work with! Bryan was amazing to work with. Our venue cancelled on us last minute and there was no issues... talking everything out with him. He was so flexible and was happy to move our booking. Loved getting my photos. Bryan and his team did an amazing job capturing our wedding day!read more

Lizzie Clayton
20:14 22 Jan 20
Bryan is a fantastic photographer and has been a pleasure to work with before, during and after our wedding. Our... wedding pictures were absolutely beautiful and they captured our day perfectly!read more

Kaya Wright
15:39 27 Nov 19
Bryan is an amazing photographer me and my husband was amazed at how good the photos turned out and how smoothly the... day went he even did a great video which all my friends and family loved including us. He puts you at eaze and really looks after you the whole dayread more

Mahmuda Hill
09:14 19 Nov 19
I met Bryan a few years ago at a charity fashion show. His photography of my handmade jewellery was amazing and really... bought out the sparkle of my crystals!! Thank you Bryanread more

Buttercup
19:40 16 Oct 19
We have had the pleasure of working with Bryan for our kitchen party and wedding. Bryan is AMAZING, we cannot stress... this enough. Bryan will blend in the background doing his best work and make you feel so comfortable behind the lens. Bryan is not only professional, he is generally caring and will always put his clients first. Bryan, we cannot thank you enough for your amazing work! Guaranteed we shall be seeing you again in the near future! Book Photography with Bryan Farrell and you will not be disappointed!!! We appreciate you! Thanks again! Ruth and John.read more

Crystal Bonetti
00:14 28 Jul 19
Bryan was the first vendor we booked for our wedding. His photos were so breath taking we asked if he could fly out to... San Diego, Ca to photograph our wedding. He communicated with all our vendors to make sure everyone was on the same page and was very detailed in his work. The day of the wedding, in the hotel room, all of us girls were a little nervous trying to figure out the logistics of showering, getting hair done, etc. Bryan came in giving everyone hugs and was full of positive energy. He really made our "getting ready" time so much fun. He truly is just as excited as everyone else to be part of your special day. We were blown away with every picture and all the emotion he captured. You can tell that Bryan has a love for his craft. TOP NOTCH photographer and a WONDERFUL person. As a bride, you need Bryan!read more

Carole Brown
15:01 22 Jul 19
Absolutely fantastic photographer and so nice to work with. Bryan will capture your day perfectly.

Vanessa Xu
08:33 19 Sep 15
Amazing photos and an absolute pleasure to work with! Thank you Bryan for producing photos that are not only of the... highest technical quality but that really captured the emotion and atmosphere of our day. Bryan's stunning photos were matched with his easy going yet enthusiastic style, and his ability to relax all of our wedding guests. Bryan added a great deal to our day. He was unobtrusive, fun and so passionate about his craft. If you're looking for a perfect wedding photographer look no further than Bryan!read more

Rachel Hayward
15:22 26 Aug 14
Bryan did the photography for my daughters christening, He produced high quality formal and informal pictures, which... have received high praise from both family and friends. I would not hesitate to use him again for any future event.read more
Next Reviews

Photography by Bryan
4.8
Based on 25 reviews
powered by Facebook

Nichola Bell
2017-09-12T17:03:51+0000
Bryan is a fantastic photographer captured my sister's wedding perfectly! Great guy too that fitted in brilliantly with... the guests! The pictures are �read more

Holly Blundell
2015-02-06T20:41:01+0000
Bryan was amazing at our wedding. We've not even seen all the pictures yet but what we have are beautiful were so... excited for the rest. He made everyone feel 100% comfortable even the children and got some pictures to prove it. Would recommend to everyone thank you Bryanread more

Nilarnti Vignarajah
2014-03-23T16:47:49+0000
Thank you again Bryan for all the amazing photos and coming down for the event.. you always manage to capture the very... essence of the show effortlessly :) I hope you will be part of the show for many more years to come! xxread more